The venue for TAA Cardiff has been announced as 275 Cowbrigde Road East, the building is now being legally occupied by our collective and for the next few days we will be installing art in the building ready for the opening on Wednesday. The TAA exhibition, will be a private viewing for members only – you can either contact us, or speak to us on the door about how to become a member. We know that many of you have already signed up at our fundraisers.

For more information on becoming a member please e-mail: taacardiff@riseup.net

We have decided to move the final fundraiser from The Wells Hotel to our new occupied building at 275 Cowbridge Road East in Canton! We have managed to clean up the building faster than expected and would love for you to see the space – therefore we also invite artists to come in a day earlier than originally planned, and for you to come and enjoy some free food and unplugged folk music!

Artists are welcome to come to the building from 12pm tomorrow (Sunday) and then from 10am on Monday and Tuesday. We have some materials, but not a lot, so please bring as much of your own stuff as possible! This will help make the space a colourful temporary wonderland!!

Please respect the neighbours by being as quiet as possible when entering and leaving. We have invited them to join us, so we hope they will see what great use can be made of empty buildings.

Join us for our final Temporary Autonomous Art Cardiff Fundraiser, to help us get some final funds for the space!

We have some great acts booked, with Cosmo & Faith Taylor visiting us as part of their UK and tour.

As usual we can hang out in the big graffiti yard, listen to some great music, make a fire when it gets chilly & we will be serving up a hot vegan meal for donation!

FAITH TAYLOR
https://faithtaylor.bandcamp.com/
Faith Taylor is an alternative-folk musician based in London.Since 2006 she has put out three solo EPs- information libre, reasons to be fearful, and previously homefried (a collection of tracks recorded at home between 2005 and 2010). Faith released her first studio album ‘Beachcomber’ in April 2014.

COSMO
http://cosmoguitar.net/
Veteran of the anarcho-folk scene on a never-ending life-long tour; once described by the Edinburgh Fringe as ‘The natural link between Woody Guthrie and rapper Jay-Z…a folksinger of our times with a veritable hive of bees in his bonnet’. Read into that what you will but expect both the heartfelt and the satirical.

Please donate kindly to the artists who are travelling by donating for their amazing music, as well as for the food & coffees will be serving and make sure we raise a good amount for tools, materials, etc for TAA Cardiff!

The programme is coming soon – meanwhile please share this image around your online networks and let people know it’s happening! We have so many awesome things lined up! Wooohooo….. We’re also getting flyers printed so if anyone wants any we can organise a drop off/pick up!

Heyaaa! Can’t believe it’s just over two weeks untill the TAA kicks off, hopes everyone is as excited about it as we are!! Last Sunday we had another Super Successful second fundraiser, a crazy combination of strange visual installations, weeeeird electronic sounds (in a grimey basement) and funky pop in the garden, so thanks again to everyone who came along and it made it possible- it was awesome to meet so many new faces! 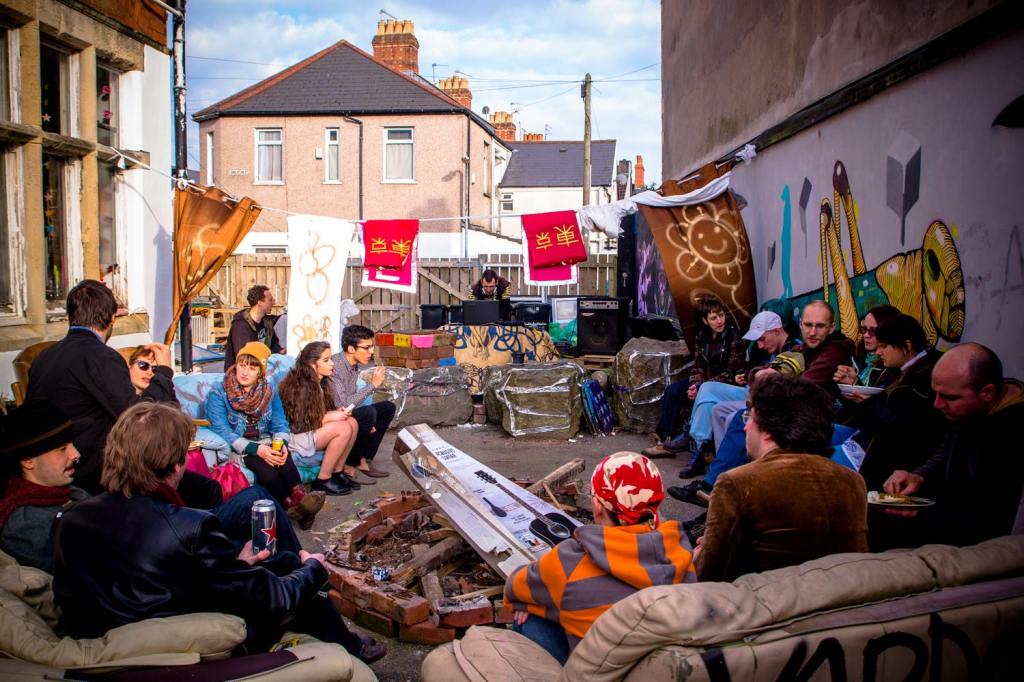 Luckily for this fund raiser we were not trying to make a roast, so food wise we were totally chilled out and on the ball, with a huge pot of scrumptious Coconut Curry that had been whipped up the night before. In the morning we somehow managed to whack out 3 different cakes, finalise the projections, lighting and run electric (safely!!!) down to the basement. Of course like last time it was not long before 4pm arrived but by this the time the sound system downstairs had been set up and the basement was looking truely wonderfully weird and sounding awfully fantastic. In one room we had a collection of trippy photos and films being projected, in another a creepy shrine complete with hanging massacred dolls limbs and a nodding cat, and the end room a crazy tangled mess of wool, colour and cables!

We were delighted to have Doromball playing for us again and he started up his psychedelic tunes in the yard as it begin to fill up with people. The rice was cooked, the curry was served, the fire was lit and it was not long before trying to find somewhere to sit outside became a slight challenge due to the number of humans!! I know I mentioned this earlier but it really was so wonderful to meet so many new people who had ventured out to this event, and that so many people want to make the TAA happen!! 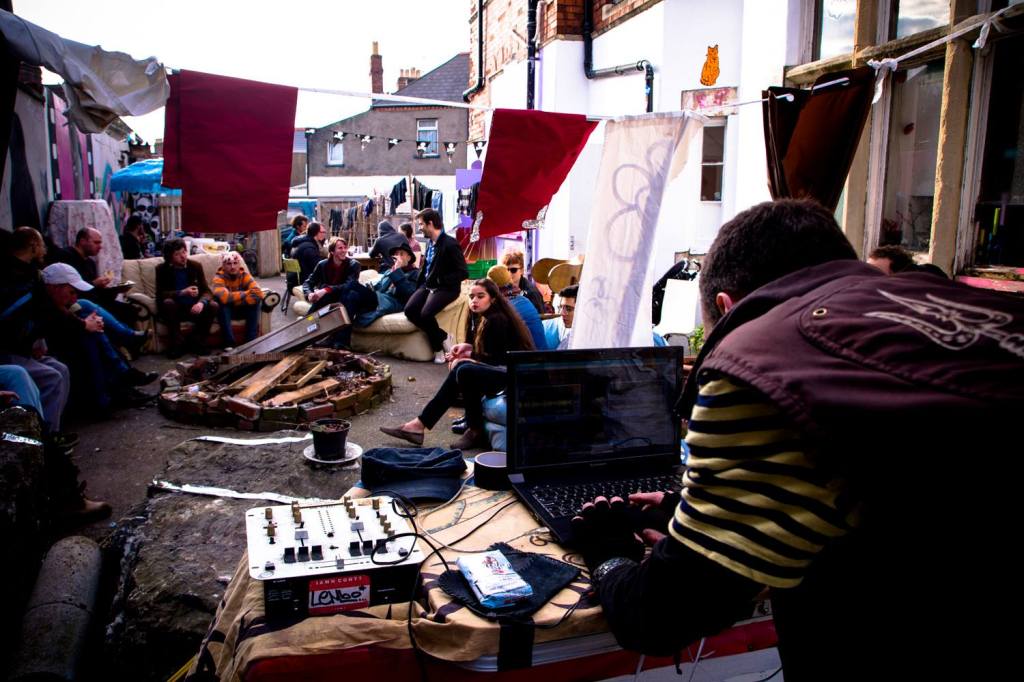 As people tucked into cake, (notably the gluten free sticky toffee being a favourite!), Little Eris took to the stage, her first performance in 2015 and since having her little one. In true Little Eris style it was a poptastic, fun and sparkly affair with great uplifting vocals. Dusk set in and the basement started up with live electronic music production. Stereoripe filled the walls with bouncy squelchy and bulgeing vibes followed by Melltith whose droney techno merged into the visually hectic room. Finally we had DJs WOWZA that got us all jumping to some DnB and a surprise set from Greggerz blasting out some hardcore to finish off the night.

Nice one to everyone that came and thanks for all the generous donations!! We have one more fundraiser, an Acoustic night with Faith Taylor and Cosmo on the 26th of April be awesome to see loads of you there. Then of course the TAA will be launching on the 29th April. Busy exciting time folks!!!! 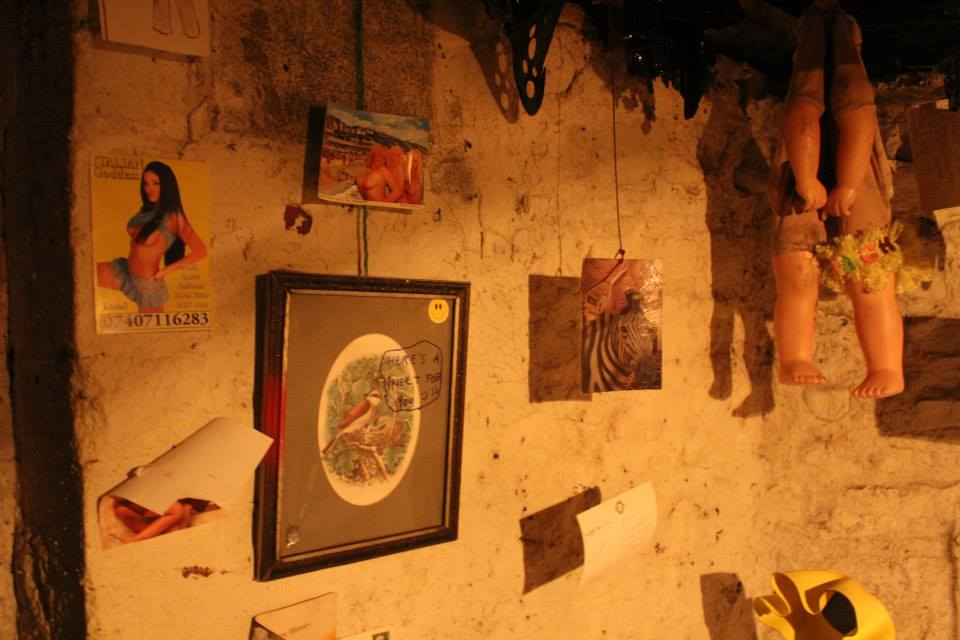 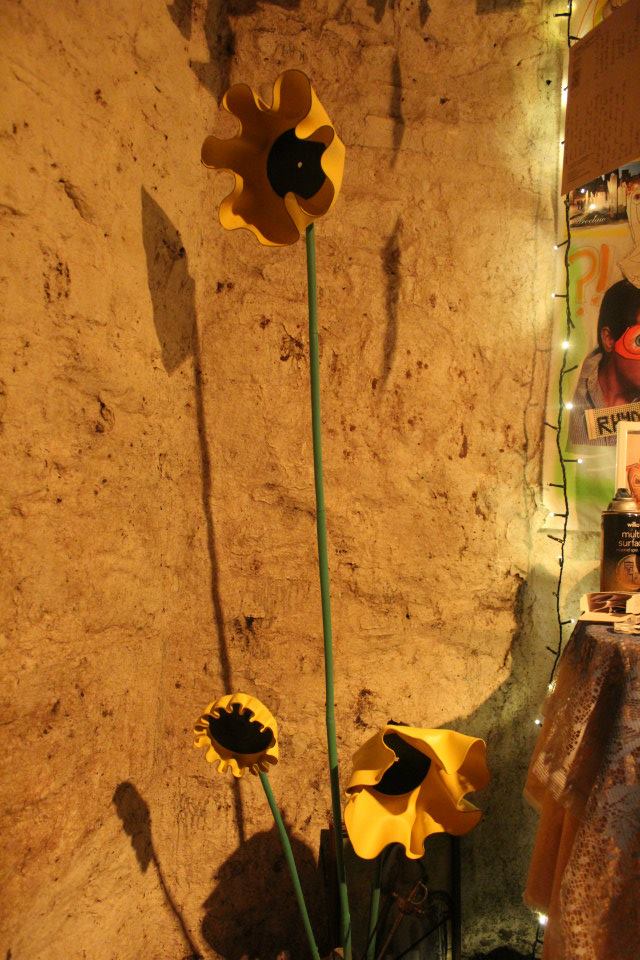 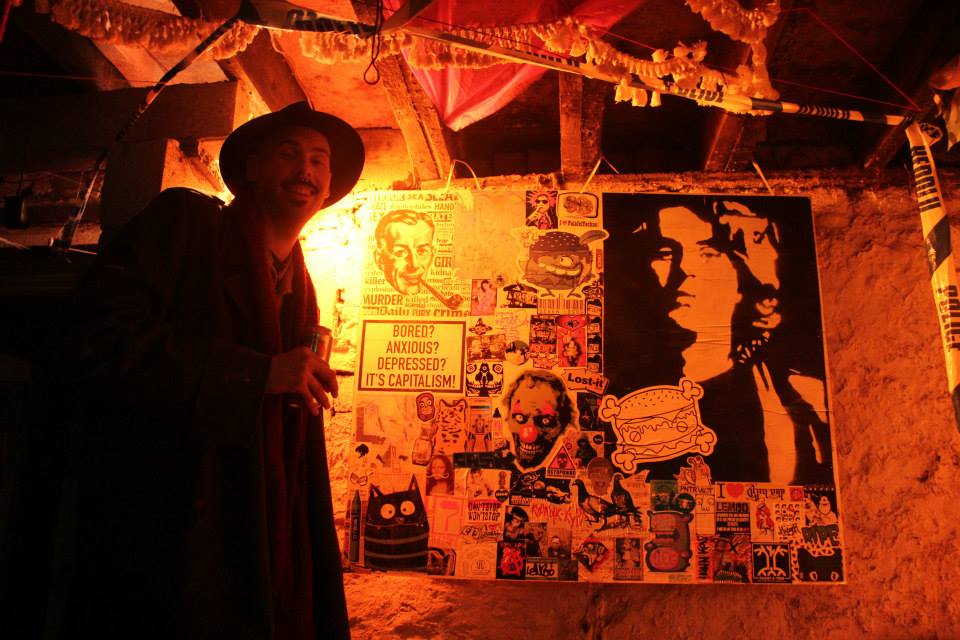 Our first fundraiser was a great success – thanks to everyone that came along! It was such a fun day, and we raised a good bit of money which will go towards running the space, which will include a hot meal every day and lots of beautiful crazy radical art! There’s also some great events, workshops and gigs planned for #TAACardiff !

The Easter Sunday fundraiser will start at 4pm, we’ll be serving vegan curry for donation, as well as having a free shop, fire and some music in the garden. We’ll also have some great DJs and acts playing for you including Little Eris (electro pop), DJ WOWZA (jump up drum’n’bass), Stereoripe ((reggae, ska, jungle, punk, dub, dubstep), Melltith & Dorombal!

To get you in the mood of Temporary Autonomous Art, there will also be a weird instillation in the bassment!!!! 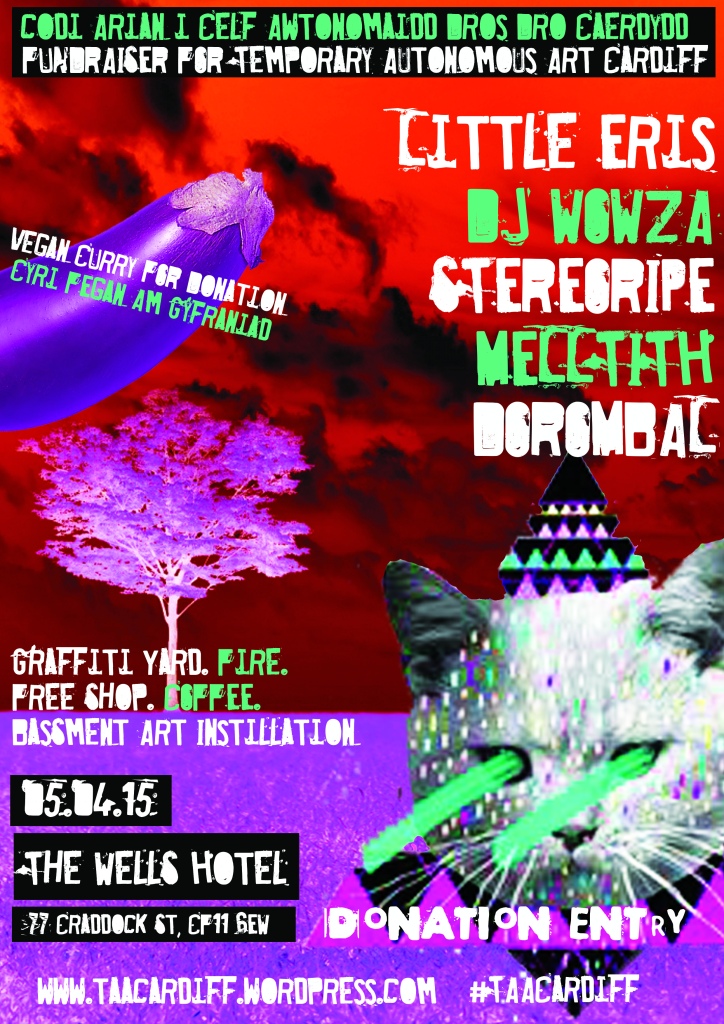 So first off just want to say a BIG Maahousive Thanks to everyone that came and made Sunday, our first TAA Fundraiser, a Huge Success!! Several days of Yard cleaning, Painting, Baking, Nut Loafing and Roasting paid off as not only was the day a Blast of fun we raised over 170 pounds- Whoooop! 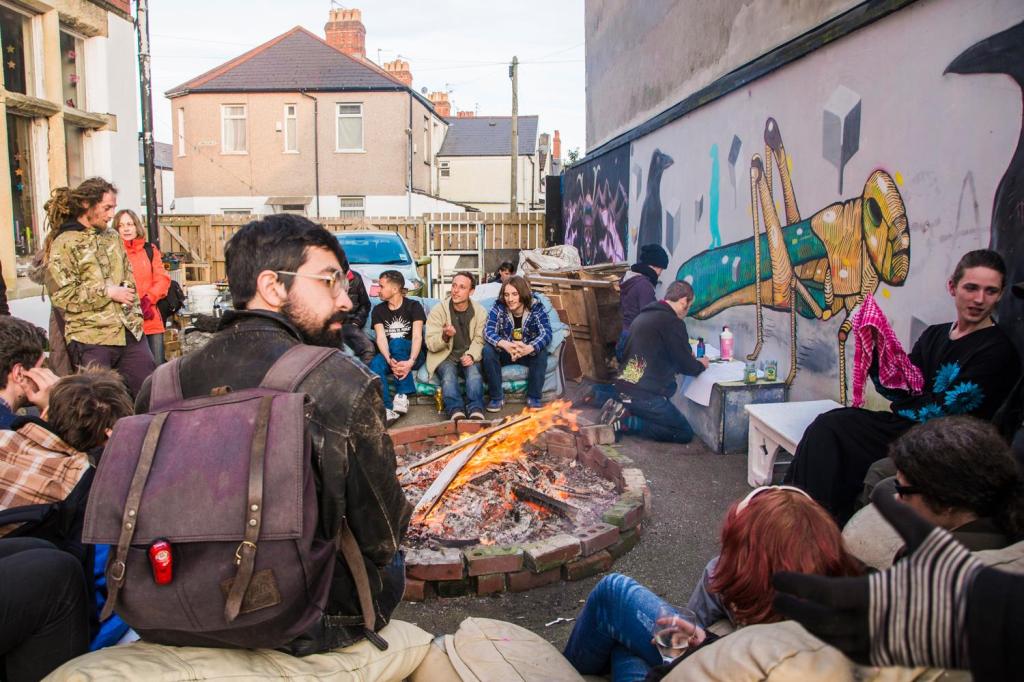 Despite the Sunday morning kicking off with a grey sky by the afternoon it was all blue and sunshine. The yard looked with cracking with it’s new lick of paint and the the Free Shop was set up an assortment of hanging clothes and other random goodies sprawled out on tables. Whilst the cooks in the kitchen were finishing up the Roast people made Banners outside for an upcoming protest against Spy cops and sexual abuse to take place later in the week. DJ Dorombal was all set up and his music flowed round the yard as people listened, chilled and waited patiently for their Sunday roast! The kitchen by contrast was a mad hussle and bussle of roasting trays and veggies- there is a reason why you don’t regularly cook a roast for 30+ people!! But we ran only 30 mins late and by half past four the corridor was full of queuing hungry people- luckily we had made an ample amount of food and the feedback was that the food was Scrummy!!! One person said it was the best veggie/vegan food they had had in Cardiff- Thaaaanks!! 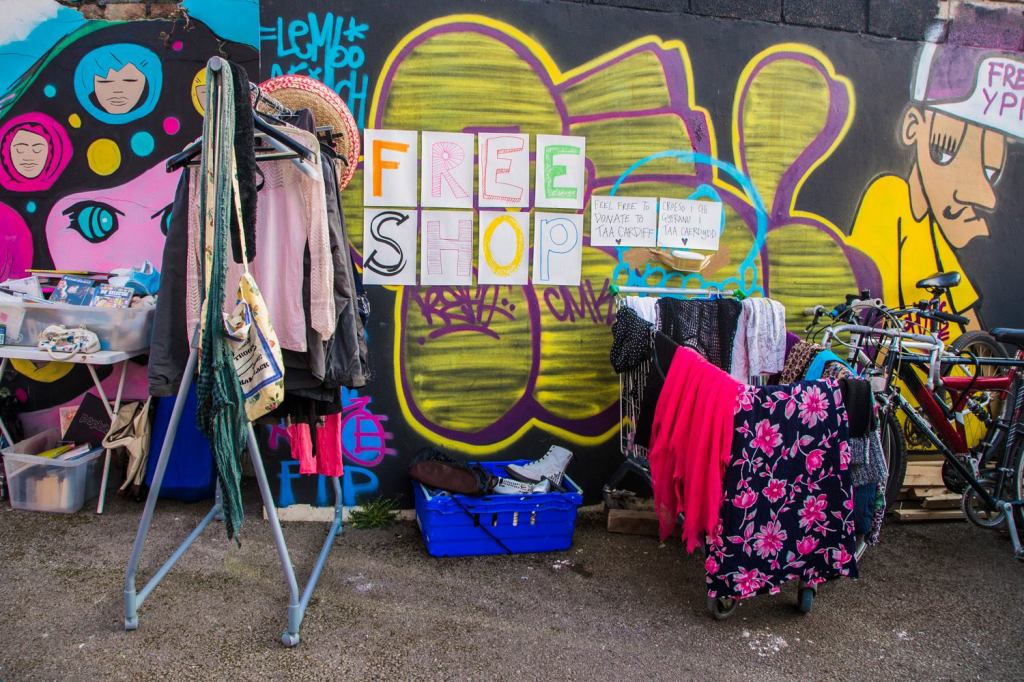 Afterwards everyone still had room to tuck into Cake and coffee, which is just as well as we had baked quite a selection; Chocolate, Coffee, banana and an experimental Gluten Free Cake! The fire got lit, a few more late comers arrived for some food and the DJ played on combining live clarinet with his tunes. It really was so awesome having Dorombal play for us, his first performance in Cardiff and definitely not his last, we want him to play again!! Such an awesome atmosphere and mix of people all ages, some met through couchsurfing, laughing yoga, some recovering from a Queer disco the night before and parents with their young babies. The best part was loads of people keen to be involved with TAA!! 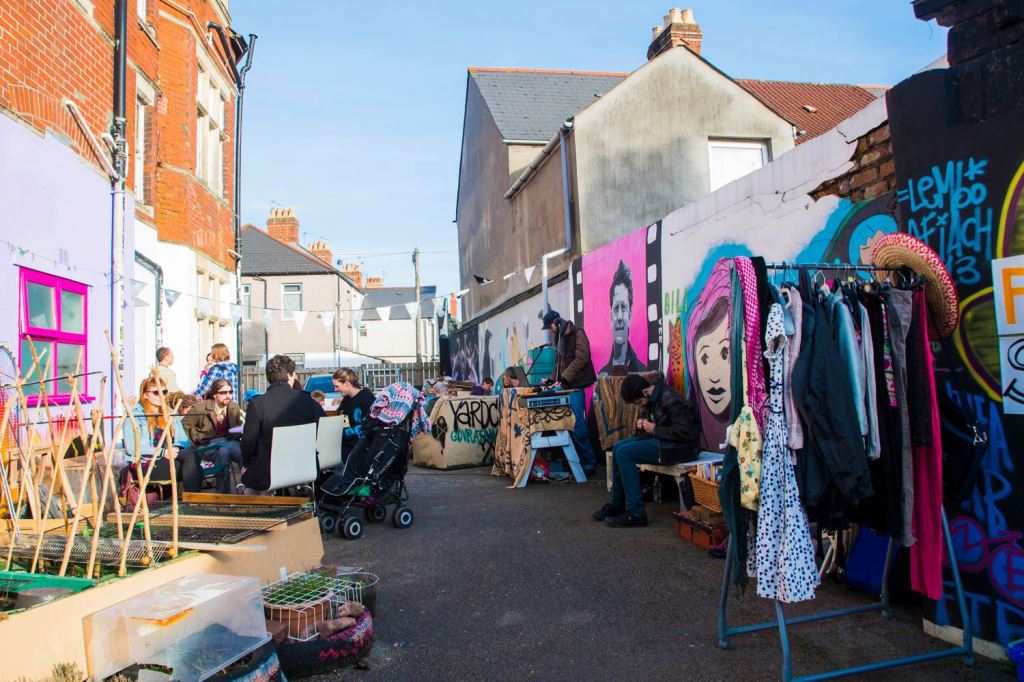 We did eventually play the film ‘The Edukators’, those who hadn’t seen it before watched it inside. The rest of us were content watching the mesmerizing flames of the fire and the yard was filled with a gentle buzz of laughter as the darkness crept it. People left in dribs and drabs and by near to 11 there was only a few of us a lef, we nibbled on the remaining bits of cake and tidied up, tired but also buzzing……. WE HAD JUST FINISHED OUR FIRST FUNDRAISER!!!! 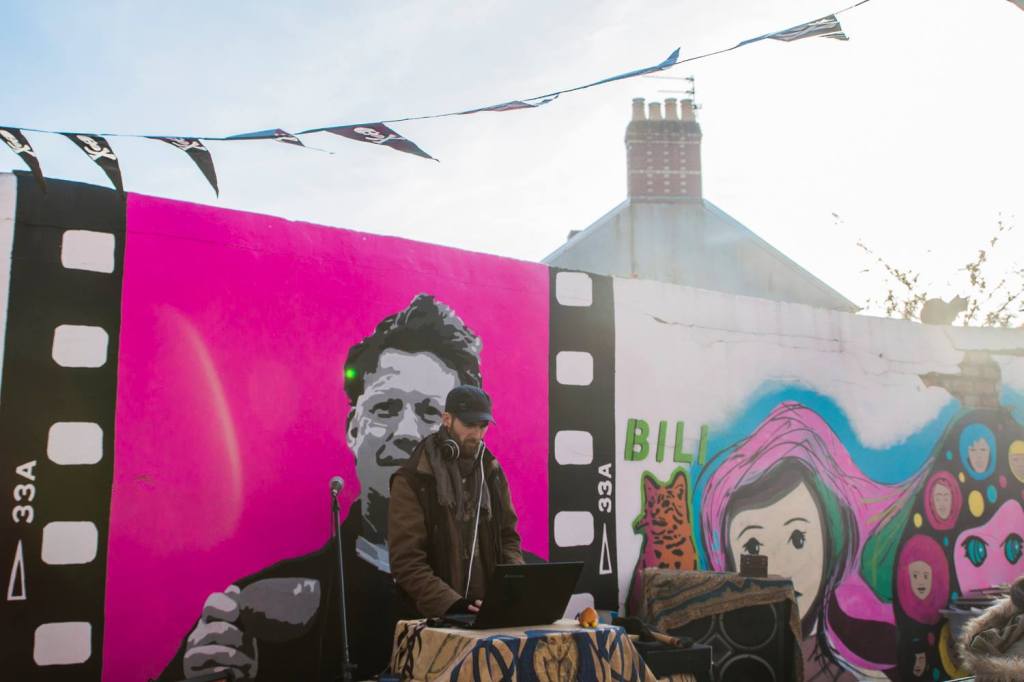 It’s no Surprise then, that the next morning we started planning our SECOND TAA FUNDRAISER!!! SO come along on Sunday the 5th of April for our ‘Arty Farty Fancey Dancey Foodie Party’. Kicking off in the afternoon with homemade Vegan cakes and coffee, Curry, live painting, Fancy Dress, GLITTER, and line up of awesome DJs blasting out beats in the basement! So come along and DANCE because Monday is a BANK HOLIDAY!!!! More info on the event soon!!!!! https://www.facebook.com/events/353076648227205/ To hear more of DJ Dorombal’s sounds check out http://www.soundcloud.com/dorombal 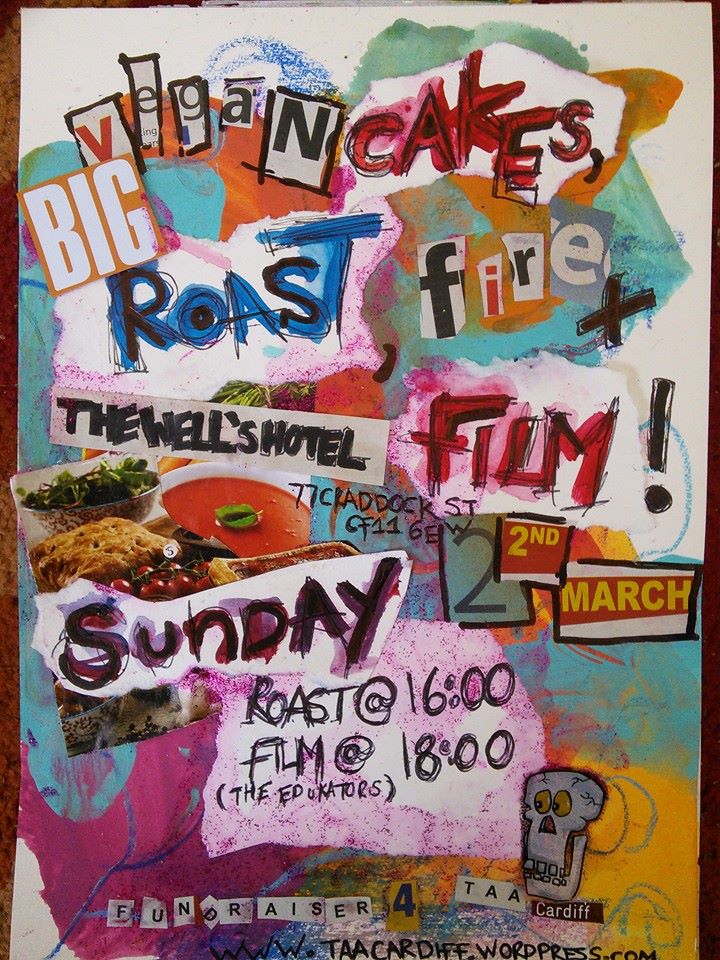 This Sunday, 22nd March, come and celebrate more sunlight as we move into Spring!! Please help us raise money for a Temporary Autonomous Art event to take place in a secret location this Spring.

Join us at The Wells Hotel, (77 Craddock St, CF11 6EW) from 15:30 for a Vegan Sunday Roast in the graffiti yard of the Wells Hotel. We will also be selling scrummy homemade vegan cakes, teas and coffees including awesome soya cappuccinos. All for donation. The Roast will be served from 4pm

The Edukators is a film about three young Germans who are struggling to make the rest of the world understand their revolutionary beliefs.

With their own unique way of fighting against the bourgeoisie state, Jan and Peter break into the homes of the holidaying rich, and rearrange their furniture to make them feel paranoid and uncomfortable in their own homes. The Edukators leave notes for their victims saying ‘Your days of plenty are numbered’. When Jules, Peter’s girlfriend, is forced to move out of her flat owing to her debt, she also becomes involved in their bizarre political campaigns, and gets a little too close to Jan.

The film takes the audience on a roller-coaster ride as ideals are tested, generations collide, passions rage and loyalties are shattered

There will be a fire going in the yard (fingers crossed its not raining!) later in the afternoon so please bring any musical instruments! We will also be selling art work raffle tickets, see below.

We hope to see loads of your smiling faces Sunday!!